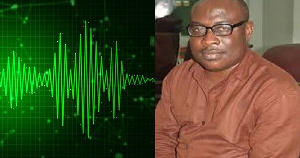 Audio recording of an interview between the first prosecution witness, Benjamin Osei Ampofo Adjei, a staff of Multimedia Group (Adom FM) and the second accused person in the case of the Republic versus Samuel Ofosu-Ampofo and another, Kweku Boahene, has been played in Court to the hearing of all parties in the case.

In the audio, the second accused person is heard confirming to the interviewer that the alleged leaked audio recording of the National Chairman of the National Democratic Congress (NDC), Samuel Ofosu-Ampofo is truly the voice of the first Accused person and that it was a meeting between him and members of the communications team the NDC.

He further indicated that the NDC identifies with the submissions of their National Chairman in the alleged leaked recording and agrees with same without any reservations.

The State led by Chief State Attorney, Asiamah Sampong, after the playing of the audio recording sort to tender it into evidence. Lawyer for the first accused person, Tony Lithur, did not oppose it.

However, the lawyer for the second accused person opposed the admission of same into evidence.

Justice Samuel Asiedu, a Justice of the Court of Appeal sitting with additional responsibility as a High Court Judge, overruled the objection of the lawyer for the second accused person and admitted the audio recording into evidence.

Subsequently, the State indicated to the Court that “that would be all for the first Prosecution Witness”, paving the way for the defence team to cross-examine the first witness of the State.

Lawyer for the first Accused person, Tony Lithur, at this stage asked for an adjournment to allow them to prepare properly to commence their cross-examination of the first prosecution witness. Justice Samuel Asiedu’s Court adjourned sitting to the 12th of March 2020 for hearing to resume.

Two NDC officials have been charged in respect of the infamous leaked tape and are being tried at the Commercial Court in Accra presided over by Samuel Asiedu.

The tape is said to have captured how the NDC is allegedly planning to commit crimes in the country and lay blame for same on the ruling New Patriotic Party (NPP).

Amongst the alleged strategies are the creation of a general state of insecurity in the country through kidnappings and arson, and verbal attacks on public officials like the Chairman of the National Peace Council, Prof. Emmanuel Asante, and the Electoral Commission chair, Jean Mensa.