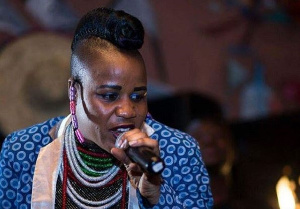 Musician Sherifa Gunu has described Bulldog’s comment that women are only meant for the bedroom and kitchen as ‘loose talk’.

The artiste manager, known in real life as Lawrence Nana Asiamah-Hanson, in an interview on 3FM’s Showbiz 927 remarked that women, unlike men, were only created for the aforementioned, adding that if God wanted both genders to be equal, he would have created them on the same day.

“Women destroy stuff, they mess up; they should be for the kitchen and the bedroom. They shouldn’t be sitting around men discussing important things,” he told host MzGee while adding that women in CEO positions only soften the face or nature of the company and its structure.

“It’s just nice and that’s what you [women] are good for. It’s like guys go for a funeral or party and there are no girls, it’s not nice. You [women] are just like an icing on the cake, not the cake… I’m saying this, they should go and cut my head or my wife can leave me if she wants to, women are for the kitchen and the bedroom.”

Bulldog’s comment triggered backlash from a section of the populace with many demanding an unqualified apology from the entertainment critic.

He however seemed unperturbed as he refused to apologise. He argued that persons who were demanding an apology misinterpreted his comments. Bulldog stressed his statement was never disrespectful to warrant calls for retraction and apology.

“Excuse my words but it was loose talk. How can women be meant for the kitchen and bedroom alone? Was Bulldog not given birth to by a woman? Women are by far the best thing God created on earth,” the singer posited on Happy FM, Saturday.

“Look at what we go through during pregnancy until we give birth. The difficulty women go through can never be compared to men. Women are now in better positions than even most men these days thanks to gender equality.

“I wish I had met Bulldog to tell him my peace of mind. You don’t talk like that if you are married to a woman,” she added.