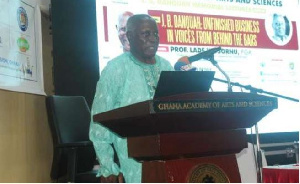 Professor Lade Wosornu, a renowned Ghanaian Surgeon, has described the late J. B. Danquah as a statesman who believed that multilingual education benefits the cognitive and social linguistic skills of an individual.

He said J. B. Danquah was of the view that multilingual education, helps English-language learning students to avoid losing their oral language skills in the home language and it supported academic achievement in other subjects.

Prof Wosornu said this in Accra at the annual J. B. Danquah memorial lecture series on the topic: “J. B. Danquah: Unfinished Business in Voices from Behind the Bars,” organized by the Ghana Academy of Arts and Sciences.

He said J. B. Danquah believes in research and encouraged people to study to find joy in research work because it broadens the horizon of individual to contribute to intellectual discourse.

He said Dr Nnamdi Azikiwe, the first President of Nigeria, described J. B. Danquah as a personality who was imbued with a sense of dedication. The richness of his personality and diversity of his interests and accomplishments as a great scholar, lawyer, poet, politician and parliamentarian will be cherished by posterity.

Prof Wosornu commended J. B. Danquah for calling for reforms to strengthen the state and infuse unity and true patriotism into the youth.

Prof Wosornu also commended Prof. Kofi Anyidoho who advocated the use of Ghanaian languages as medium of instruction in creative writing in universities, including exit examinations.

He urged students to learn their local languages in addition to the English and foreign languages to develop different perspectives to issues and make them fit for purpose in the emerging markets.

However, the Ghana Education Service curriculum for 2019 and 2020 spent 50 per cent working hours on English language, 29 per cent on Ghanaian language and 21 per cent on French language.

Statistics from UNESCO shows that globally, 40 per cent of the population lacks access to an education in a language they speak or understand. It said when language fade, so does the world’s rich cultural diversity.

UNESCO says dissemination of mother tongues would serve to encourage linguistic diversity and multilingual education and transmit and preserve traditional knowledge and cultures in a sustainable way.

The J.B. Danquah memorial lecture series was instituted in 1968 in memory of the founding member of the Academy. He was a lawyer, philosopher, scholar, novelist, politician and Journalist who died in prison in February 1965.

J. B. Danquah authored several ground-breaking scholarly works which include “Gold Coast: Akan Laws and Customs” and “the Akim Abuakwa Constitution (1928)”, a play entitled “The Third Woman (1943)”, and “The Akan Doctrine of God (1944)”.