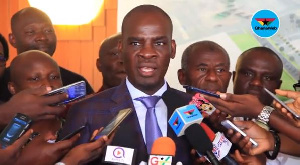 The debate on the voters’ register has taken a new twist as the Minority Leader, Haruna Iddrisu and some leading members of the opposition National Democratic Congress (NDC) have been accused of feigning ignorance of the programme programme of the Commission.

According to James Kwabena Bomfeh, acting General Secretary of the Convention People’s Party, (CPP) the Electoral Commission (EC) has never hidden the intention to procure new Biometric Voter Management System (BVMS) from the stakeholders at the Inter-Party Advisory Committee (IPAC) level and that members on the Minority’s side in Parliament have always have been part of the process right from day one.

Mr. Bomfeh, who is affectionately called “Kabila”, said the Commission has an internal Procurement Committee on which are two representatives from Parliament representing each side of the divide – Majority and Minority.

“Information available to me is that Dr Bernard Okoe Boye and Dr Dominic A. Ayine represent the Majority and Minority respectively. The EC’s budget as well as procurement for each year are discussed in house before sent to the Special Budget Committee of Parliament,” he said in a statement.

According to him, the minority can therefore not feign ignorance of the procurement programme of the Commission unless their representative perhaps failed to live up to expectation or kept them in the dark.

“Furthermore, the Special Budget Committee comprises the top echelons of the House including the leadership of both sides. Are we being told that the Minority did not know of the EC’s intention to procure a new BVMS when their budget for 2020 was approved? If a different budget was approved for the EC other than the activities lined up to be undertaken, then why not resort to the application of the law or Parliament’s oversight power to bring the Commission to order?,” Mr Bomfeh, queried.

He further referred to comments made by the Minority Leader, Haruna Iddrissu, which indicate that the procurement of a new BVMS was a necessity.

“Parliament is known as the House of Records. Indeed records are kept of proceedings in the House to the minutest detail. Opportunities are given for corrections of previous minutes at the following or subsequent sitting.

Parliamentary records of December 17, 2018 on budget estimates for 2019 show in column 5165, paragraphs 3, 5 and 6 the following statements from the Minority Leader, inter alia, the same EC, acquire BVRs, they have not; acquire BVDs, they have not. Yet, they are not able to use their budget allocation and they are asking for more. That contradicts our quest to say that give them additional resources. Mr Speaker, they should replace the Data Centre, improve their IT infrastructure and refurbish those equipment and prepare for those major elections.

Mr Speaker, added to it is the matter of the bloated register. We all cry about numbers and bloated numbers. In South Korea, there is now what we call an image recognition software. If you double register, you could be detected through an IT instrument.

The EC should be encouraged to look for such software so that people who double register, would be exposed by the IT software of image recognition. I am sure it is in other parts of the world.

Mr Bomfeh, who was once the Director of Elections for his party advised Public office holders to engage in honest conversations with the citizenry, adding that Ghana’s democratic journey has come of age with three successful regime changes at the Executive level and seven Parliamentary terms.

“We have had the longest surviving Constitution since independence, though the most problematic and controversial. The People of Ghana have shown the highest level of tolerance for this democratic dispensation and that must be respected and applauded.

“The EC has put a case across justifying their programme for a new BVMS. It is a solid case thus laid. Let complementary views be expressed and presented in a respectable fashion. Let all democracy lovers endorse and support the EC for this initiative. Every Ghanaian, once of age, 18 years and above wherever they may be, must be ready to participate in the process when the registration starts,” he said.

Meanwhile the EC is focused on ensuring a free and transparent election by compiling a credible electoral roll in this year’s election and therefore would not be distracted by tangential issues emanating from certain quarters.