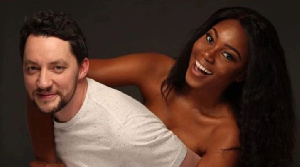 Yvonne Nelson’s ex-boyfriend, Jamie Roberts, seems to have moved on with his love life and has already found himself another girlfriend.

This follows a new video of him and another black lady having fun on a yacht in a manner akin to that of new lovers.

As it is widely known, Yvonne and Jamie had a baby girl, Ryn Roberts, together sometime in October 2017. Following the birth of Baby Ryn, Jamie Roberts who is a photographer from Ireland had been visiting Ghana and was often seen in the company of Yvonne and Ryn in photos on social media.

But after some time, the actress deleted of Jamie Roberts’ photos from her social media pages leading to rumours of a breakup.

YvonneNelson confirmed in 2019 that she had broken up with Jamie Roberts, who had two children from a previous relationship with a woman reported to be of Nigerian descent.

In an interview, the star actress indicated that she and Baby Ryn’s father were now co-parenting and were no more lovers. Since the revelation from Yvonne, the British photographer has been quiet and he appears to have moved on. In the new video sighted by YEN.com.gh, Jamie Roberts could be seen enjoying a yacht ride with the black lady suspected to be his girlfriend.