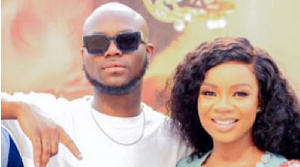 Ghanaian musician and songwriter Gregory Promise Bortey popularly known as King Promise has reacted to news circulating within the media circles that he is currently enjoying an amorous relationship with newscaster, Serwaa Amihere.

According to the ‘CCTV’ hitmaker, rumours of Serwaa and him [King Promise] swelled on social media last month after they were spotted together at the christening of sound engineer, Killbeatz’s baby.

The Legacy Life Entertainment act in an interview with MzGee on TV3’s New Day indicated that, the public has been rooting for him [King Promise] to date the GHOne presenter which is totally wrong because he has not really thought about that.

The artiste stressed that, he acknowledges the beauty of the warm-hearted media personality, but music is his sole priority for now.

He says he is committed to engaging in a relationship with Serwaa if nature decides for them in the nearest future.

Meanwhile King Promise is out with a brand new banger titled “Sisa” with production assistance from Ghanaian music producer, GuiltyBeatz.