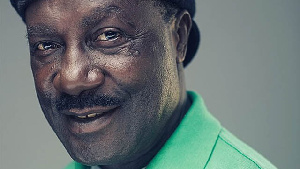 News of Ghanaian celebrities such as Shatta Wale, Wendy Shay, Edem, Afia Schwarzenegger and many more lashing out at the Food and Drugs Authority (FDA) for enforcing a law that prevents celebs from adverting for alcoholic brands has irked veteran musician, Gyedu Blay Ambolley.

While reiterating his support for the FDA in an interview with MzGee on 3FM’s ShowBuzz, the veteran artiste stressed that it’s imperative for the FDA to take such stance due to the future of Ghana’s youth.

The ‘Simi Rapp’ singer asserted that alcohol is destructive and he believes celebrities with a “well-functioning brain” would always refrain from endorsing alcoholic beverages or brands.

“All those celebrities who have proper sense will not endorse alcohol because alcohol is not good.” He noted.

He added that many of today’s music videos features the youth hence promoting alcoholic products could easily influence these young ones.

Consequently, Ambolley urged the FDA not to relent on its efforts at ensuring that the laws of the country are respected.

Why the FDA placed a ban on Ghanaian celebrities

About five years ago, the FDA made it known that celebrities could not advertise alcoholic products. It explained that the ban is an adherence to a World Health Organization (WHO) policy and efforts to ensure that minors are protected from being lured into alcoholism.

He told Graphic Showbiz the FDA would not allow any popular figure to negatively influence the youth. He rather asked that celebrities should support the move instead of calling on the authority to rescind its decision on the basis that their incomes had reduced as a result of the ban.

“Can you imagine someone like Shatta Wale or John Dumelo endorsing alcoholic beverages for their fans who are probably below 18? What will they be telling them? The use of alcohol is as serious as guns, and I would rather plead that celebrities support the cause,” he said.

“Well known persons have the potential to influence their followers who are not legally permitted to possess alcohol or use alcohol. In view of that guidelines have been set to guide operations of alcoholic beverage companies, including advertisement of their products and this is the reason well known persons are not allowed to endorse the products.”