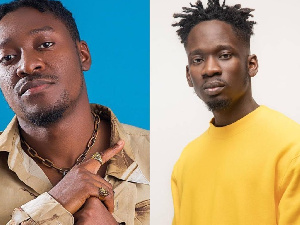 Among Sarkodie, R2bees and others, Guiltybeatz has named Mr Eazi as his angel sent from above.

The award-winning Ghanaian music producer appreciated what Nigerian musician, Mr Eazi has done for him when speaking in an exclusive interview with Zion Felix on the ‘Uncut Show’.

Guiltybeatz said he has worked with Sarkodie, R2bees, StayJay, Dr Cryme and others but working with Mr Eazi opened a huge opportunity for him.

According to him, he became a super star through Mr Eazi.

Gulitybeatz, known in private life as Ronald Bamfo disclosed how Mr Eazi got featured on the ‘Akwaaba’ song and also opted to finance the project.

Through his work with Mr Eazi, he recounted being on tours with the Nigerian musician which opened the door of opportunities for him in diverse ways.