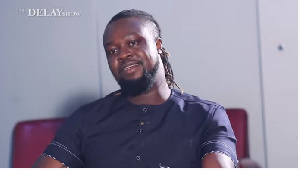 Actor and producer Eddie Nartey says marrying a good woman makes one focused. He said this in an interview on the Delay Show over the weekend, monitored by Ghanaweb.

The actor said contrary to what many believe that marriage restricts people from being themselves and leaving in freedom and independence, marriage actually helps people to be focused on their lives and choices.

He said after he got married, he realized there were a lot of decisions that he was making as a single person that was not beneficial. But with a good woman, he is able to stay focused on his business, cut off unproductive friends and lifestyle.

“A good woman makes you focused, you tend to put a stop to the unnecessary lifestyle you used to live. A good woman will draw your attention to certain things you used to do when you were single, that you have not even paid attention to. It depends on the individual but as for me, marriage is good for me,” he explained.

The actor and former repertoire and artiste manager at Zylofon media said even though marriage compared to single life has lots of differences, it has made him a more responsible human being than he was.

“I used to say that there was no difference between being married and single but after I got married I realized there were a lot of differences, because now everything you do, you have to discuss with your spouse, she has to know where you are at all times, you virtually have to tell her what you are doing etc. As a single person you think only about your wellbeing but after marriage, it is not you alone again,” he said.

When asked by Delay why someone like herself should forgo her independence and marry,

Eddie replied that marriage is more of a partnership than a ‘master and servant’, and when people genuinely love one another, it is just right for the partners to check up on each other when they have not seen or heard from each other, and that should not be seen as shedding off your independence.