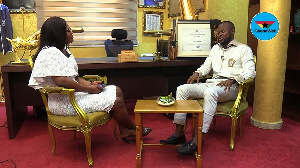 Whilst Ghanaians were amazed at the turn of events and public show of wealth at the wedding of the son of Osei Kwame Despite, Kennedy Osei, about a week ago, a prophet’s name popped up on social media.

In a viral video, leader of the Power of Worship International, Prophet Daniel Amoateng was seen prophesying into the future of Tracy Akosua Gyamfuaa Ameyaw now Mrs. Tracy Osei.

Whilst many believed it was true, there was another group of people who doubted the accuracy of the prophecy.

For the second group, Tracy’s mother had a role to play in the prophecy.

Days after this discussion has been going on, Prophet Daniel Amoateng spoke about it for the first time in an interview with GhanaWeb’s Bernice Owusuwaa.

He told GhanaWeb that he has had no contact with Tracy’s mother either before or after the wedding.

“I don’t know Tracy’s mother. I have never met her before,” he stressed.

When probed further, he had a message for critics who doubted his prophecy.

“When the people say it’s not true…our mindset has been programmed that God cannot work and God doesn’t still have prophets. Because how can one say the prophecy is not true…there are people who have received prophecy and didn’t happen.

Some people have dated for 8 years, but nothing has happened. But it shows you that people don’t really trust the power of God. And I don’t blame them, I’m sure they have been getting prophecies and none of them are coming to pass.”

He added that the day he gave the prophecy was the first time he met Osei Kwame Despite’s daughter-in-law.

“We don’t know the mother and the lady too that was her first time coming to the church.”

Watch the full interview below