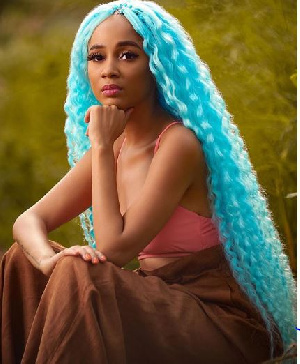 Sister Derby has candidly spoken about her relationship life and the kind of men that often cross her path.

The Ghanaian mermaid speaking during a recent interview answered questions about her past relationship with 26-year-old Ghanaian rapper, Medikal. The 35-year-old model turn singer mentioned that the age gap between them was not an issue “Me I don’t mind age, most of the time I have dated younger people” she said.

According to the “Kakalika love” singer, dating people who she is older than has become natural to her because older men hardly approach her. “Older people don’t approach me,” she said and Sammy Baah Flex, who was interviewing her chipped in that “because you look young” and she replied “probably”.

She continued that “when I say that people don’t believe me but I don’t have any old man in my DM, all like kids, young people”. Sister Derby seized the moment to reiterate that her break up with the “Omo Ada” rapper has nothing to do with age.

When asked what the real issue was, she said: “The issue was the girl but you can’t blame her because he was part of it.” Sister Derby, who is out with a new song titled “Somebody” added that she suspected it for a long time and decided to walk out because it was becoming disrespectful to her.