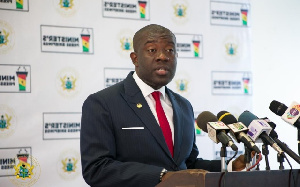 Information Minister, Kojo Oppong Nkrumah, has justified the Akufo-Addo-led administration’s decision to invest a whopping Gh¢16 billion into the banking sector clean up.

In a motion to thank President Akufo-Addo for his State of the Nation Address (SONA) delivered in Parliament on Thursday, February 20, 2020, Mr. Nkrumah stated that indeed the Gh¢ 16 billion could have done a lot for Ghana.

For instance, he noted that Gh¢ 16 billion could have ended the Double Track system of the Free Senior High School (SHS) policy, constructed several kilometers of roads and led to the provision of several infrastructure projects.

However, he said, because the government is cognizance about the impact of human lives, it decided to invest the money in the clean up exercise.

According to him, the administration, by so-doing, has saved the deposits of some four million Ghanaians.

Speaking on the floor of Parliament on Tuesday, February 25, 2020, while contributing to a debate on the SONA, he said a robust corporate governance system has been put in place and 7,000 jobs saved.

Already, he revealed that Gh¢ 11 billion has been spent on the clean up exercise and that this week, an additional Gh¢ 5 billion would be disbursed.

He indicated that the investment has succeeded in preventing the contagion effect of the financial crisis, wondering what would have happened if the four million depositors had lost their deposits.

Meanwhile, he indicated that the agenda for growth in industry, and services, has now got the best chances of success.

By solving ‘dumsor’ alone, he said, Government has created the stimulus for industry to grow unlike it was doing in 2016 under the erstwhile Mahama’s regime.