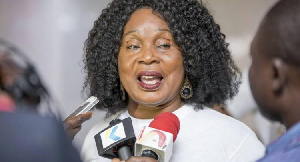 Veteran actress, Grace Omaboe known popularly as Maame Dokono says she was not good in bed so she considered getting a man who was better than her.

According to her, she was wild and a very hard nut to crack so people thought she was “shege” in bed but that wasn’t the case.

She noted that men who thought she was so good and came prepared by taking in all sort of things were disappointed when they had an affair with her.

Grace Omaboe who was speaking in an interview on Vibes In Five monitored by MyNewsGh.com mentioned that when she was going into marriage one major things he considered was a man who was good in bed to compliment her because she sucked at ‘bedmatics’.

“I’m not sexually good in bed so I considered that. The man I married was average. I wasn’t good at all. If you look at me and you look at how beautiful I’m and the hard woman I was you’ll be mistaken if you go in and take viagra and other enhancers you’ll be sorry, you’ll be disappointed.”

She indicated that she never cheated on her husband but because he was not handsome and she was extremely beautiful, she was cheating on him.