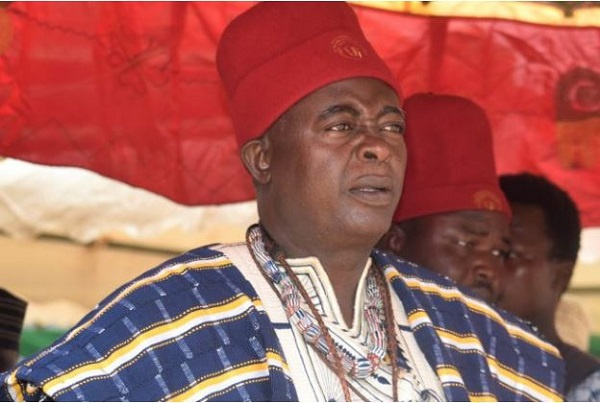 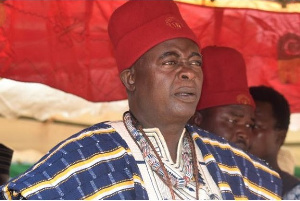 The Paramount Chief of the Navrongo Traditional Area, P3 Denis Asagpaare Balinia Adda ll, has asked the two contenders in the Navrongo central constituency New Patriotic Party (NPP) Primaries, to caution their supporters against politics of verbal attacks and the use of venomous language.

The Chief made the appeal to the Incumbent Member of Parliament, Joseph Kofi Adda and his fierce contender, Tangoba Abayage, calling on them to take serious measures to ensure members of their teams do not engage in acts that can disturb the peace and serenity of the area especially as they approach the primaries.

P3 Asagpaare, who was speaking on the sideline when Tangoba Abayage paid a visit to officially inform him and elders about her desire to contest the primaries and ask for their blessings, expressed worry about how people have lost the understanding and true essence of politics, which, he said is about bringing development to the society.

He told the crowd that had gathered at his palace that “Politics is all about ideas”. “it is not about insults and attacks”. Adding that” you are not enemies, so don’t insult and attack each other”.

The Navro-Pio warned that the Traditional Council would not take it lightly on those who would, in the name of politics, cause trouble and destabilize peace.

He urged supporters from both sides and other political parties to learn from how Parliamentarians work together peacefully at the Parliament House and let it reflect in their campaigns. He urged them to choose leaders whose ideas meet their expectations.

“they will win power and go to parliament house and be drinking tea and coffee and we will be here poisoning ourselves to death. We do all these because of politics. For 18 years I have worked in the Parliament house. There, they don’t insult themselves. They work peacefully while drinking their coffee so why must we the electorates fight over politics to the extent of wanting to kill ourselves?”. He urged.

To the aspirants, the Navro-Pio charged them to be decent in their utterances and tailor their campaigns along ideas and the issues affecting the people. He wished them well and reminded them to put the development of Navrongo above all things.

On April 25, 2020, the NPP in the Navrongo Central constituency will decide who leads the party as they try to retain the seat.

Joseph Kofi Adda who has served as MP for the area for some terms wants to be given another term to transform the area. He has promised more job opportunities, wealth creation for the people and development in all sectors.

Tangoba Abayage on the other hand who is new entrant wants to rewrite history by breaking the male dominance and becoming first female MP for the area. She has pledged to commit her all into making Navrongo a beautiful place and bringing a leadership that will include all in decision making.