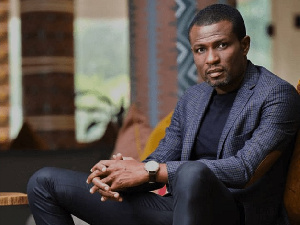 President of the Creative Arts Council Mark Okraku Mantey has suggested it is misplaced if the Food and Drug Authority’s reason for banning Ghanaian celebrities from advertising alcoholic products is to ensure that minors are protected from being lured into alcoholism.

The astute music producer and brand expert in an interview on Daybreak Hitz, Monday noted that there is the need for a holistic approach instead of the outfit placing such ban.

“Until we have control on the phone, this TV and radio ban won’t work,” he confidently stated while advising that parents should rather focus on instilling discipline in their children.

“I’m not sure it’s about how the kids see alcohol on television. It is how we mould our kids from our homes. Have you seen any adverts on akpeteshie [local gin]? Meanwhile it’s the most popular alcohol. If it’s about the kids, why not show commercials when they are asleep?”

On how he hopes to tackle the issue as president of the creative arts council, Mr. Okraku Mantey said he will soon meet the FDA over the issue but will have to make adequate preparations in order to make sense.

About five years ago, the FDA made it known that celebrities could not advertise alcoholic products. It explained that the ban is an adherence to a World Health Organization (WHO) policy.

In the midst of the incessant pressure to lift the ban, Kofi Essel, Head of Industry Support Services Department of the FDA in an interview said the FDA would not allow any popular figure to negatively influence the youth. He rather asked that celebrities should support the move instead of calling on the authority to rescind its decision on the basis that their incomes had reduced as a result of the ban.

“Can you imagine someone like Shatta Wale or John Dumelo endorsing alcoholic beverages for their fans who are probably below 18? What will they be telling them? The use of alcohol is as serious as guns, and I would rather plead that celebrities support the cause,” he told Graphic Showbiz.

“Well known persons have the potential to influence their followers who are not legally permitted to possess alcohol or use alcohol. In view of that guidelines have been set to guide operations of alcoholic beverage companies, including advertisement of their products and this is the reason well known persons are not allowed to endorse the products.”

On Thursday February 13, 2020, a ceremony held at The Oriental Hotel, in Lekki saw the unveiling of Nigerian celebrities INi Edo, Jim Iyke, Uti Nwavhukwu, Teddy A, Charles Okocha, Victor AD and Melvin Oduah as ambassadors of Adonko Bitters – a product by a Ghanaian company.

The event was hosted by Ghanaian actress and TV presenter Selly Gelly. Moments after the news went viral, it sparked outrage, with many Ghanaian celebrities launching scathing attack on the FDA.

“So why can’t Ghanaian leaders think outside the box? Who the hell sat at the Food and Drugs office and drafted such a primitive ban? Adonko Bitters has now signed Nigerian celebrities, given them huge sums of money to advertise the product so it airs on DSTV. Will you go after DSTV? This is pure stupidity. A foreigner is now benefiting when Ghanaian celebrities could have advertised and paid taxes… Fools!” fumed comedian Afia Schwarzenegger.

“Small time dem go ban alcohol for parties and then after they will Ban water too then we will drink urine and our sweat! Nonsense!” dancehall artiste Shatta Wale jabbed.