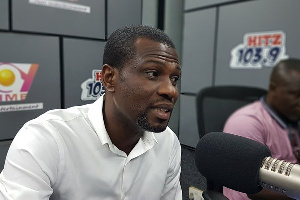 President of the Creative Arts Council Mark Okraku-Mantey has said Socrate Safo, Director for Creative Arts at the National Commission on Culture (NCC) speaks with so much emotions because the back and forth in governance has rendered him highly frustrated.

Speaking on the state of the creative arts sector under the Akufo-Addo administration, Mr. Okraku-Mantey admitted that the processes involved in taking a decision in governance could frustrate officials especially if they have not received any form of tuition or orientation on how different the system is compared to running a private business.

“As president of the creative arts council, do you get frustrated that these things are not working? It’s supposed to be fast-tracked,” asked host, Andy Dosty.

“My luck was that when we came to power in 2016, I did my masters around the same time. And I did leadership and governance. What you think you want to see done, the people at the ministry also have a different orientation. They’re for everyone; they’re for every party. There’s a way they operate; you cannot change it. If it must change, it must go to Parliament.

“So as for the frustration, people like Socrate, that’s why he talks the way he talks sometimes. He is heavily frustrated because he has not had the opportunity to learn before. But some of us have had practical people in our classroom to teach us. So for me, even if the frustration comes, I’m able to contain and tolerate because I have a rough idea of how some of these things happen,” Okraku-Mantey answered.

Last year, a report by entertainmentgh.com suggested that Mr. Safo was highly frustrated.

According to the report, the filmmaker’s despondency stems from the fact that, since the NPP assumed office and appointment was offered him as Director at the NCC, no funds have been allocated to his outfit. The lack of funds and support from the government to his unit has virtually put all plans, projects and operations of his outfit in limbo.

In the early stages of assumption of power by the party, Safo, according to the publication was said to have used his own resources and funding to renovate the then dilapidated spacing at the NCC.

He was also said to have used his own money to project some initiatives at the NCC including, ‘Zongofest’, ‘Ghana Wear Fair’ and others.

The publication was corroborated by the movie producer in his recent interview with Attractive Mustapha.

He said: “As we speak now, there is lack of resources so I am calling on whoever needs to listen, I sit back and get frustrated because I see government fulfill all promises but not delivering for the creative industry.

“A careful analysis of the state of our industry shows that we have not achieved what we need to move the industry forward and almost all the promises we gave look like till date we have not started the implementation so that’s the source of my worry and frustration. The government is doing well at all sectors but the Creative Arts industry is lagging behind.”