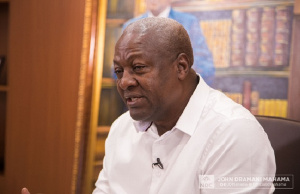 He claimed that apart from destroying the cocoa sector, the Akufo-Addo government cancelled all contracts the previous National Democratic Congress (NDC) government awarded for cocoa roads to be constructed.

The former President, who is campaigning to come back to power after being defeated massively as incumbent in 2016, used his tour of the newly created Western North Region last week to virtually incite the people in the region against the ruling government.

Wherever he went, he told them that the NPP government had destroyed the cocoa sector. He, therefore, promised to resume the ‘good things’ his NDC government was doing for the farmers should he win the December election.

He said in the Juaboso Constituency that “they (NPP) lied their way to power. We (NDC) don’t promise and fail the people. We are a ‘promise and do’ party.”

“I don’t know if it is (excuse my language) ‘abro ne bayie’, but we gave a lot of contracts for cocoa roads and when they (NPP) came they told all the contractors to stop work. Now they have been bringing machines to clear portions of the roads as if they are ready to construct the roads but they are doing that because we are in an election year,” he added.

Besides, he claimed “since the NPP assumed office, the only time it has increased cocoa price for farmers is this year and even that has been done because of the upcoming election.”

“We were increasing cocoa prices every year. They are in their fourth year of government. In their first, second and third years, there was no increment. In the fourth year when they realized there is an election, they have increased cocoa price to some GH¢40,” he claimed.

“We gave fertilizer free to the farmers but they are selling it now. During our time, the fertilizer sack had the inscription boldly displayed ‘NOT for Sale’ but now they have removed the ‘NOT’ and it is left with the ‘For Sale’,” he added.

He said at Oseikojokrom which is a border town with Cote d’Ivoire that “we lifted cocoa farmers high. We gave them free fertilizers,” adding rather cynically that “when the farmers receive free fertilizers they will not go home, cook and eat them; they will apply them to the farms to increase yield.”

He also claimed that the NPP government was employing divide and rule tactics, saying without any concrete proof that “they discriminate; they are saying it is their government in power so they are entitled to everything in the country.”

Interestingly, when Mr. Mahama was in office, all his appointees, including security chiefs and the civil service, were either from his home region or people who voted for his party (NDC).

Asiedu Nketia, the NDC General Secretary, said at Elluokrom in Bia West, where Mr. Mahama toured, that the NPP government had not constructed a single road in the past three years and only brought graders to the area when they realized the election was getting close.

He told the people that the owner of the road (Mahama) was coming back to fix it even though they were in power for eight years and never helped the people there.

Records show that when Mr. Mahama was at the helm, there was not a single innovative intervention for the cocoa sector which impacted positively on the sector as cocoa production continuously dwindled.

Under President Kufuor, the NPP raised cocoa production from 341,000 tonnes to about 700,000 tonnes as of 2008 and as a result cocoa production hit the historic 1million mark in 2010/2011 due to policies like the Mass Spraying and Fertilizer Subsidy programmes that Mr. Kufuor introduced.

Under Mr. Mahama’s NDC, cocoa production started declining from 1 million tonnes and by 2016 when he was leaving office, it had reached 760,000 tonnes.

Since the NPP took office in 2017, cocoa production has 900,000 metric tonnes annually and it is expected to go higher with the prudent measures being deployed.

Cocoa farmers across the country, including those in the Western North Region, were given far less support by the Mahama government than they needed to fight the cocoa disease.

The decision was taken for COCOBOD to bear the cost of removing hundreds of thousands of hectares of farm areas infected with CSSVD to oversee the cutting down and replanting of cocoa trees on farms and to provide compensation to both the affected farmers and their landowners and currently many farmers who left their disease-ravaged farms are returning to freshly restored farms made possible by COCOBOD and the government.

The Akufo-Addo government has also initiated the courageous pursuit of the Living Income Differential (LID), so that cocoa farmers can earn more money for their labour and be able to afford improved standards of living.

The LID simply means that in addition to whichever price Ghana sells its cocoa within a season, the country will earn USD400 extra for every tonne of cocoa beans.

As a result, hundreds of millions of dollars in extra revenue apart from what the country would have normally made will now begin to flow into the country when cocoa is sold.

It is projected that this year alone, some US$360 million will be earned from LID. This is a major leap in revenue from cocoa sales and good news for cocoa farmers. All these have been made possible by the ingenuity of the present management of COCOBOD, with the full backing of President Akufo-Addo.

The government has explained on several time occasions that some of the cocoa road contracts were terminated because the award processes were riddled with irregularities and most of the costs were inflated.

Currently, about 43 contractors have been given jobs through national competitive bidding processes to commence work on various roads in the area while about 78 more are awaiting clearance.