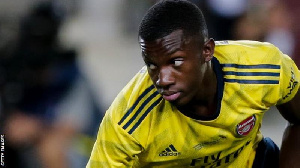 Eddie Nketiah is keen on learning and improving after his striking performance in Arsenal’s 3-2 victory over Everton on Sunday.

The Anglo-Ghanaian opened his English top-flight account this season as Mikel Arteta’s side secured a comeback win over the Toffees at Emirates Stadium.

Nketiah has been exciting since his return from a loan spell with Leeds United – scoring two goals in all competitions.

Notwithstanding, he has voiced his aspiration to keep developing in his bid to get more playing time under manager Arteta.

“I’m here, I believe in myself and I want to be in the team so I will just keep working hard in each situation I am put in.”

The 20-year-old’s effort came off an accurate cross from Bukayo Saka, and that was the first time since 2008 Arsenal had two players under 21 score and assist for the team.

21 – Nketiah’s opening goal, assisted by Bukayo Saka, is the first goal that @Arsenal have netted in the Premier League that was scored and assisted by two under-21 players since September 2008, when Denilson assisted Nicklas Bendtner vs Bolton. Kindergarten. pic.twitter.com/IkhtDSxSc4

Nketiah also shed light on his rapport with the teenager who now boasts of 10 assists for the Gunners this season across all competitions.

“It’s great. Like I said you’ve just got to keep getting in there and I was confident that after Baka put in a great ball I’d be able to get on the end of it and thankfully it went in,” he continued.

“Bukayo’s in great form. I think he’s got a wonderful delivery and we’re quite close off the pitch. I told him when he gets in there make sure he bends it in and I’ll make sure I’m on the end of it.

“We linked up well today and it’s great that it came off and we got a goal from it.”