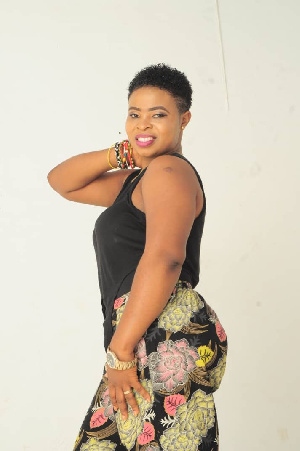 In God’s own time he makes things beautiful, these are the words of Gifty Boadu a native of Agona in the Ashanti Region of Ghana who has thrilled her fans for years with her gospel music compositions.

She started singing at a very tender age and with time discovered she was not only gifted as a singer but a songwriter as well.

Her debut album has finally been released through years of waiting upon the Lord for spiritual direction as such all the five songs on her album were messages she received from God to put into songs.

Currently, both her mother and husband are being credited as the executive producers of her music with the backing of Spirit Maxi as the sound engineer.

In 2010, she wrote the song; “Twereduampon” a worship song that she composed a high life version of it. Throughout her education at Juaben Secondary school and Christian Service University College in Kumasi, she nursed the ambition of being a musician.

Gifty, as she is affectionately known by her fans, looked up to a gospel musician by the name of Mama Esther as a mentor. She was inspired by the fact that the faithfulness of God and his blessings are true and his mercies endureth forevermore.

To her, God’s grace is so much upon our lives regardless of how many times we sin against him. That was the inspiration behind her songs especially the highlife version of “Twereduampon”.

According to Gifty, being in the music scene is not by chance but rather to serve a purpose. This is because she sees herself making a positive impact on the lives of people through music.