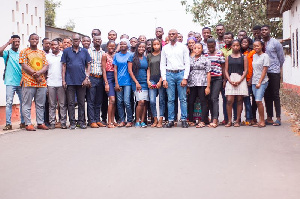 Some Radio Univers volunteers who benefited from the training workshop

Students journalists at Ghana’s leading campus radio station, Radio Univers 105.7FM, have benefited from a training workshop organized for them by GhanaFact, an independent digital fact-checking organization in the country.

The training, held on Saturday, February 22, 2020, was to expose the students to the field of fact-checking and news verification.

At the workshop, the Radio Univers volunteers, who are made up of students at the University of Ghana and the Ghana Institute of Journalism, interacted with the Managing Editor of PesaCheck, a fact-checking organization in Kenya, Eric Mugendi.

Mr. Mugendi introduced the volunteers to PesaCheck and the work they have done over the years, especially their role in successive elections in Kenya.

Aside from teaching the volunteers how they can be thorough in their work and produce fact-checking reports based on sources readily available online, Mr. Mugendi charged them to go beyond the normal style of reporting news and be critical in the information that they churn out to the public.

Managing Editor of GhanaFact, Rabiu Alhassan, after the workshop, told UniversNews about how disinformation is being weaponized in the country’s online space and the plans of his team ahead of the 2020 Presidential and Parliamentary elections

“Before we launched GhanaFact, we did a survey of some 400 Ghanaians to understand the ecosystem of disinformation in Ghana and it was quite obvious that more than 69% of the respondents said they had encountered disinformation in the last one year. More than 90% of them suggested that there will be the need for a fact-checking platform and that led us to launch Ghana Fact. Since we launched, we have published over a dozen reports and we are hoping at doing some good work ahead of the election because of how disinformation is being weaponized online,” Rabiu Alhassan told UniversNews

Station Manager of Radio Univers 105.7FM, Dr. Abubakari Sidick Ahmed, also told UniversNews Saturday’s workshop was the first of a number of training programmes that will be organized for volunteers.

He acknowledged that although the station is mainly to train students, it was in competition with those in mainstream media.

“We are going to rule out a series of workshop seminars for our volunteers. Everybody knows that Radio Univers is a training facility but at the same time we are somehow in competition with others outside. If we do not introduce our students at this stage with some of the new areas in journalism, then they will lose out of the market. It is a very important training exercise, it is the first of its kind but won’t be the last because we are planning to fully participate in the elections of 2020 and we cannot do that if we do not start building the skills,” he noted.

Dr. Abubakari Sidick Ahmed also hinted on his plans to make Radio Univers different from those in mainstream broadcasting.

“Fact-checking is something that is missing in our journalistic field across the African continent. It is a process of tooling the students to know that there are two types of fact-checking – the anti hoc fact–checking procedure and post hoc fact-checking procedure. If we are able to do this critically, we are not going to have a situation where anybody is going to take us to court because we fully check the information before churning it out. We want Radio Univers to be an alternative system and different from the mainstream where there is the competition to be the first to come out,” he added.

Dorothy Buatsi, who is the editor of Radio Univers, was appreciative of the training and looked forward to leading the volunteers at Radio Univers produce more credible reports.

“After this workshop, we are going to be better at reportage. We will make sure to fact-check any information that we get so that we will be able to give out credible news to the public.

The news verification platform was established in August 2019 and operates under the umbrella organization FactSpace West Africa.

It is a non-profit social enterprise that seeks to close the palpable market gap for an independent, non-partisan fact-checking organization in Ghana, West Africa.

The platform aims at curbing the spread of disinformation on both traditional and social media.