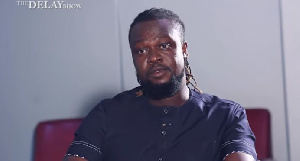 The 2019 Ghana Movie Awards came off at the National Theatre on Friday 20th December. The event was marred by a series of incidents, which threatened to take away the shine and glory of the event, which was in its 9th year. Notable among the many issues was the problem with sound.

After the event, some celebrities spoke against the poor nature under which the event was organized; vocal among them was actress Yvonne Nelson.

The actress in a series of tweets advised Fred Nuamah and his team to put the program on hold and do a proper review of the event to serve its purpose.

The latest, to add his voice to this call is actor Eddie Nartey. Months after the actor won the best scriptwriter, he told Delay he is yet to receive his plaque.

Nartey said, “It is becoming increasingly disgraceful every year… if Ghana Movie Awards has been organised for nine years and in the 8th year I won, and after two months, I still do not have my plaque, then that tells you a lot about the awards. It doesn’t speak well of the event.”

He, however, blamed his colleague actors who despite the glaring disrespect by the organisers, still go for the event.

“I blame the people who go and sit there and be part of it because if nobody patronises them, the organisers will know that they are doing something wrong…. I don’t even know if they will give us the plaque,” he noted

Ghana Movie Awards 2019 was marred with a lot of incidents that threatened the beauty of the event. Last year’s Awards ceremony started more than four hours behind schedule, with the Minister of Tourism coming in as late as 9pm to meet an empty auditorium. The issues worsened when the sound technician’s insistence that he must be paid some arrears, amounting to GH¢1,500, before he provided sound for the occasion.