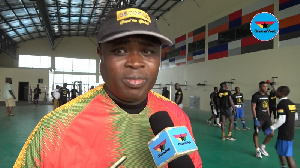 President of the GBF, George Lamptey

Under the theme, “Nurturing Future’s Disciplined World Class Boxing Champions,” the move was also aimed at giving the platform to young boxers to exhibit their talents while they remained in school.

Speaking at the inauguration, President of the GBF, George Lamptey, said the initiative would help raise world champions for the country.

“Over 100 young boxers have been put under the programme and they would be nurtured and monitored to become the best they could be,” he stated.

“This is a sure way to discover and develop talents that would become world champions like Azumah Nelson and others.”

The country, he said, had a lot of talents but they lacked proper monitoring to ensure their best, and the GBF’s new project would help bridge the gap.

“We need to develop talents from a very young age in a structured manner and that is a sure way to get boxing rise to the top,” he stressed.

Boxers from aged seven to 17, he said, would be nurtured to become the next generation of world champions for the country.

He said their training would include nutrition, psychology, sports medicine and other areas, courtesy collaboration with the University of Health and Allied Sciences.