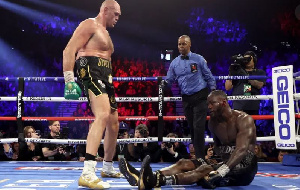 Former IBF Welterweight champion, Joshua Clottey says he was confident Tyson Fury was going to emerge as winner in the bout against Deontary Wilder.

Clottey in an interview on Ghana’s number one Sports Station, Happy FM, after the bout said, Fury had all the skills and techniques to beat Wilder who is no much for the British.

According to him, Wilder has no game plan when he fights but just has the quality of been a good puncher, thus, with Fury’s skills he was confident the British fighter was going to knock him down.

Speaking in an interview on Happy Sports with Ohene-Bampoh, he said, “I knew Fury was going to beat him. He is just a power puncher and nothing else in boxing.

“Fury has good techniques that help him in boxing. The way Fury said he was going to stop him prior to the boxing was amazing.

“He knows nothing in terms of techniques. We all know that he (Wilder) is very good with his punch, but when it comes to other things he knows nothing. He has no game plan apart from that”.

He further said that the referee made a right call in ending the bout due to the injury suffered by Wilder.

“In Heavyweight division every punch can change the game. It was good for the trainer to stopped the fight due to the injury Wilder suffered”.

“He can never knock him out. Fury is a better boxer than Wilder and can never win the bout and has done an amazing job”, he ended.