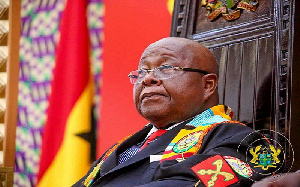 The Speaker of Parliament, Professor Aaron Mike Oquaye, has directed that Hansard records the walkout of the Minority caucus during proceedings in the House in Accra on Thursday.

The Hansard is the official transcript of Parliamentary proceedings.

Prof. Oquaye’s directive followed a concern raised by a Deputy Majority Whip, Matthew Nyindam, who during the correction of votes and proceedings at the commencement of sitting yesterday, sought to know why the votes and proceedings captured the Minority as having been present when they left the House en bloc.

The votes and proceedings is the provisional record of happenings in the House.

The Minority caucus, moments before President Nana Addo Dankwa Akufo-Addo begun delivering his statement on the State of the Nation in line with Article 67, walked out, citing tyranny and the decision by the Electoral Commission to compile a new register at the behest of President Akufo-Addo, as some of their reasons.

However, the votes and proceedings did not capture the incident.

Acting on the matter, Prof. Oquaye asked the Clark of the House, if there was any indication in the votes and proceedings that some members at a point in time during proceedings left the House, to which the answer was in the negative.

“I direct that it should be clearly stated that certain members of this honourable House at one point left during proceedings.

“They announced and left, and it should be duly recorded and should appear in the minutes that certain members decided to leave this House during proceedings,” he said.

Prof. Oquaye, however, said the Minority were not barred from participating in the debate to approve or reject the account given by President Akufo-Addo as the true state of the nation.

Meanwhile, guidelines for the debate have been set ahead of the debate expected to begin on Tuesday.

It is expected to be devoid of unnecessary interjections, so that members’ chain of thoughts is not disrupted.

President Akufo-Addo’s address was in line with Article 67 of the 1992 Constitution, which mandates him to “at the beginning of each session of Parliament and before a dissolution of Parliament, deliver to Parliament a message on the state of the nation.”