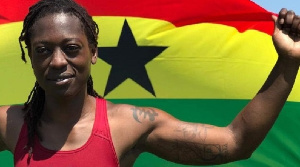 Ghana’s female boxer, Dr Ornella Sathoud has adavanced to the semi-finals of the African Olympics Boxing Qualifiers in Dakar –Senegal.

The female boxing prospect is close to sealing qualification to the 2020 Tokoyo Olympics after beating her Ugandan opponent, Doreen Nassal in the quarter-finals of the qualifiers.

The female boxer who holds a PHD defeated her Ugandan opponent in the middleweight division on Monday to progress to the next stage of the qualifiers.

A victory in her next fight will see her book a spot at the Tokoyo Olympics which will make her the first female Ghanaian to qualify to the Olympics.

However, in other bouts held today, another female contender Faruza Osman lost her spot to Kenya’s Catherine Nanziri in Round 16 of the Welterweight division.

There was victory for another Ghanaian boxer, Shakul Samed, the last born of the Samir brothers. The youngster managed to defeat Soulleyane SY of Senegal in the Light Heavyweight division to book a spot in the quarterfinals.

Samuel Takyie also won 5-0 against his Malawian opponent to qualify for the quarterfinals of Men’s Featherweight at the ongoing African Olympics Boxing qualifiers for the Tokyo 2020.