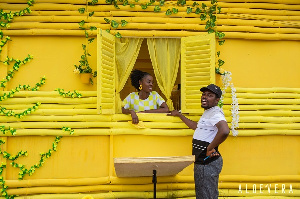 Peter Sedufia has shared his five important reasons why his new film – Aloe Vera is a must-watch for all films lovers in Ghana and beyond.

Prior to the premiere of the film in Ghanaian cinemas on March 6th, the director who is renowned for his impressive creative expressions on all his projects have been busy with media promo for the latest work.

Aloe Vera has caught the attention of film lovers for its uniqueness and breaking the long-standing drought of shooting with an already existing location.

He established and built his own community for the film, which has even made the film won hearts even before the premiere.

Watch Peter Sedufia below as he shares his five reasons why you should watch the film on March 6th across Silverbird Cinemas (Accra Mall and West Hills Mall):