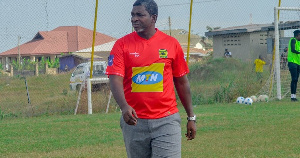 According to him, the role of coaches is to train players by making sure that their performance improves individually and also come together collectively as a team.

Football fans in Ghana were thrown into a state of shock following as Aduana Stars and Asante Kotoko started a league game with 10 players, instead of 11, due to superstition in a matchday 11 of the Ghana Premier League.

But Malik Jabir speaking in an interview with Kumasi based Angel FM called on supporters of the club not to interfere with Maxwell Konadu’s work through juju.

“Supporters with all due respect if you interfere with what the coach has to do, it will bring a lot of problems and that is what we are in now which some of us do not understand”

“If a coach prepares his team and fans come in with different directions and the team does not perform how you do blame the coach. Maxwell trained with his players before Aduana duel but unfortunately, the team had to play with 10 men at Dormaa”

“I will plead with the supporters, those who feel they are soccer witch doctors you never go onto the pitch. It is about time we sideline those things. If Kotoko and Aduana should combine their team and play Barcelona, you will see the number of goals we will get, they will score us because they know how to play football better than us”

“We should rather help our coaches to train the players instead of relying on black magic. We have a lot of things that can depress a player and I think using that bad road for Aduana game was a factor to Kotoko defeat because the players could not give their best”

“Those witch doctors should do their things outside. Let Maxwell do his training and pick his team. People should not interfere with his work” he ended.