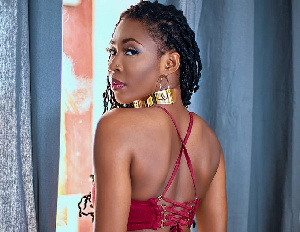 AK Songstress who is also known as Queens of African Dancehall was honoured for being an outstanding role model and having a positive influence in her community and across Ghana.

The event which was held in Canada on February 14 attracted some music producers, managers and record label owners in Africa, Europe and United States of America.

The female dancehall act, who is currently on Paradise Entertainment label, has been one of the strong forces pushing and putting the Ghanaian dancehall music on the world map and has performed on countless international platforms.

Winning the award didn’t come in as a surprise knowing the stuff she was made of when it came to vocal delivery and the messages her songs carried.

The singer in a post on Twitter said it was great to be acknowledged for her “enthusiastic personality and creativity, having strived for greatness beyond Ghana in this demanding time and appreciated for having such positive impact in the world.”

Her management team was full of appreciation to fans and well-wishers who had supported the female dancehall artiste over the years and promised that fans should watch out for more surprise achievements as she was poised for action this year and years to come.

AK Songstress thanked her fans for their continuous support, adding that “This is for the FAN DEM…2020 is my year. Watch out.”

With a number of local and international awards to her credit, AK Songstress, in 2017 won the best female dancehall artiste of the year award at the Ghana Naija Showbiz Award held in Lagos in Nigeria.

She beat dancehall artistes such as Cynthia Morgan, MzVee and Kaakie to win the highly contested award.

She is the first female to ever win the discovery of the year for dancehall/reggae artiste at the 2014 BASS Awards in the midst of male contenders.

AK Songstress who is one of the few talented young dancehall artistes making impact on the music scene was discovered some years back by the Chief Executive Officer (CEO) of Paradise Entertainment, Duke Banson.

Her latest single ‘Give Dem’ featuring Kuami Eugene is still receiving massive airplay and has been tipped to be nominated for a number of awards in the coming days.