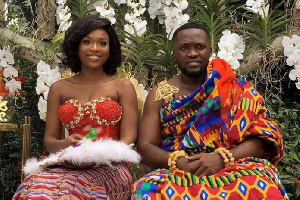 Kennedy Osei may still be struggling to agree with terms that his life has become one of public interest just like any other celebrity.

The first son of Ghanaian millionaire, Osei Kwame Despite, wasn’t much known until his extravagant wedding to Tracy, which turns out to be the most talked-about wedding ceremony in Ghana because of the opulence of the nuptials that happened last week.

Kennedy and Tracy’s fame on social media quadrupled after their wedding. Ken who has about 9000 followers on his private Instagram account, gathered over 50K followers a few hours when he made his account public after his wedding.

Tracy has also seen such significant increase of people following her Instagram. Her followers shot from 9K to over 67K currently. With all these giving the signal that the public wants to see more into their lives, the young couple, however, appear not to be down for the celebrity kind of public life.

Pulse.com.gh has chanced on a video of the couple driving with a paparazzi hanging around them during their wedding ceremony and Ken, spoke to one of the bloggers, telling him that they don’t want a public life. “ We that we want a private life, you are coming to give us public life,” he said in Twi.

The blogger replied, “you are now a celebrity couple” and Kennedy responded “we beg you people” and drove off in a Rolls Royce with his newly married wife.