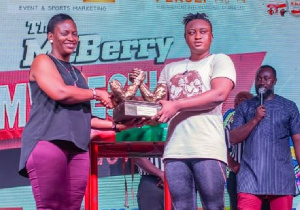 Yasmin is the new Armwrestling queen

16-year-old Armwrestler Mariam Kadri Moro on Friday night was the toast of fans by delivering on her promise as she annihilated and dethroned her mentor and undefeated police woman Alberta Ampomah Boatemaa to become the New Queen of Armwrestlering in Ghana.

Yasmin who was the underdog had come massive support from Bukom with the clear intention to beat her bully and confirmed it was time for to reign.

Both Yasmin and then undefeated Alberta recorded fouls each soon as they mounted the table at the call of referee Husseini Akueteh Addy . At the referee’s grip, Yasmin aka Hajia Vampire took the battle to the former champion with power and style to win the left arm battle.

Alberta Ampomah had the chance to come back into the battle but determined Yasmin was so focused to be outwitted by the champion. The later in last than 2 minutes pulled harder pinning Alberta to the pad to win the second battle to record a 2 straight win defeating the undefeated champion to the admiration of her fans and patrons.

Defeated Alberta in a post battle interview insisted being the best and thus throws a challenge to the new champions for a rematch.

The men’s heavyweight battle has been rescheduled for a later date as the undefeated Derrick Kwakye aka Asoka GH could not come back to the table to face Antwi Boasiako aka Punisher after defeating Lebanese Ghanaian Fawzi Saoud in the right arm battle.

Derrick Kwakye had in a grand style defeated all contestants in the left arm battles and was just on the verge of being crowned when his corner called he couldn’t continue.

The Ghana Armwrestling Federation will at a later date stage the finals of the men’s heavyweight battle.

The Mcberry Armwrestling Showdown on Friday night at the Forecourt of Happy FM in Accra was put together by the Ghana Armwrestling Federation, Legaci101 a sports markerting firm and Perception Management International.