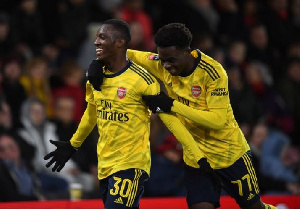 Eddie Nketiah is fast establishing a reputation for himself as one of Arsenal’s reliable strikers.

This is exemplified in his four goals from nine shots on target for the Gunners, a stat stressing his predatory instinct in making his chances count.

Nkietah scored from close range at the end of Bukayo Saka’s low cross in the 26th minute.

Despite Sam Surridge’s late goals for the Cherries, the North Londoners held their nerve to seal a fifth round berth.

The game against Bournemouth was Nketiah’s first under manager Mikel Arteta since his recall from loan at Leeds United at the beginning of January.

Nkietah now shifts his attention to Sunday’s Premier League game as Arsenal head to Turf Moor to take on a Burnley side who sit level with them on 30 points.

For Eddie Howe’s team, they welcome Aston Villa to the Vitality Stadium for a crunch encounter on Saturday.

4/9 – Eddie Nketiah has scored with four of his nine shots on target for Arsenal in all competitions. Opportunity. #FACup #BOUARS pic.twitter.com/qR0MVNKfxs