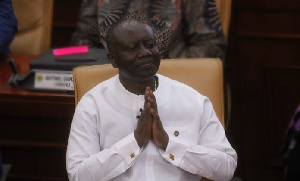 Embattled former Deputy Governor of the Bank of Ghana, Dr Johnson Asiama is blaming the Finance Minister, Ken Ofori-Atta for the collapse of uniBank.

According to Dr Asiama, the finance minister refused to save uniBank during its liquidity crisis.

In a statement issued by lawyers of Dr Asiama, the former official of the central bank opined that the Minister declined suggestions to settle payments due to the struggling uniBank to save it.

“The Minister of Finance was actually invited by the bank based on my promptings to discuss these payments to uniBank but he declined suggestions on the ground that uniBank had gotten enough support to thrive.

Clearly, if at least, part of these payments were done at the time, uniBank would have avoided the persistent daily clearing failures that shut them out of the interbank money market,” portions of the statement released read.

Meanwhile, lawyers of Dr Johnson Asiamah have refuted media reportage that their client was on the run and hiding.

According to one of the lawyers, Rockson-Nelson Etse Dafeamakpor, their client was out of the jurisdiction, hence the decision to reschedule the invitation by the investigation team.

uniBank is one of seven banks that went down due to poor corporate governance and mismanagement of depositors’ funds according to the BoG.

It has been merged with other banks into what is now know at the Consolidated Bank Ghana limited. Owners of uniBank are in court over the matter.