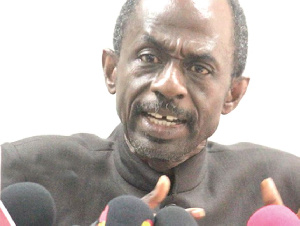 General Secretary of the opposition National Democratic Congress (NDC), Johnson Asiedu Nketia, says party Communicators should not be coward despite the arrest of their Communications Director, Sammy Gyamfi.

Sammy Gyamfi was picked up by officials of the Police Criminal Investigations Department(CID) on Monday, January 27, 2020, after a program on UTV.

Asiedu Nketia has told his party faithful to be brave, resolute to expose the rot in the Akufo-Addo administration.

” I’m telling all-party Communicators not to be intimidated by actions of the NPP despite the arrest of Sammy Gyamfi, because their intention is to put fear in NDC to prevent them from saying the truth but they should not be intimidated by that,” Johnson Asiedu Nketia told Kwame Tutu on Anopa Nkomo on Accra-based Kingdom FM 107.7

“We believe in the rule of law so we don’t under why politicians will like to influence the police service.”

The police obtained warrants from the Court to arrest and interrogate the NDC Communicator, for his alleged involvement in forgery and attempts to spread false information to cause fear and panic in the country of kidnapping and causing unlawful damage.

After several hours of interrogation, the police granted him bail. He is to report on Monday at 2 pm for further investigation.