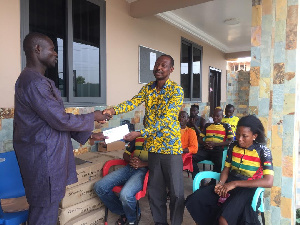 A rep from National Para-cycling team takes the donation

Mobraz Farms, an established farming entity that deals in commercial Poultry and livestock-based at Pantang in Accra have donated cash of $4000 as air tickets for three para-athletes ahead of the upcoming Para-Cycling track qualifier in Milton, Canada this month.

The gesture matured from its larvae stage into its pupa realization when the Chief Executive Officer of Mobrazgroup Mohammed, extended his emotional support of that amount to the Team.

The Para-Cycling National Team is engaging in this qualifier as part of a mandatory classifier of prospective athletes ahead of Tokyo this year.

In his remarks Board Chairman of Mobrazgroup, Mohammed Awal, was of the view that this gesture formed part of the company’s social responsibility in society.

CEO of Mobrazgroup, Mohammed, was extremely touched and emotionally implored the athletes to be self-confident and should believe in themselves no matter the struggles.

“It is a delight to be part of this history and we do believe by associating ourselves with the para-cycling National Team, we would be duly acknowledged”- he intimated.

Ghana is the only African country in this year’s qualifiers and possible participation would mean great medal acquisition at the Tokyo Olympics.

Technical Director and President of Para-Cycling commission in Africa, Shaaban Mohammed thanked the generous establishment and prayed for Allah to increase whatever has been spent on the Team.

Pilots- Rudolf Mensah, Emmanuel OTUKORNOR SACKEY, Clementina Ayoung would be exhibiting their experience in that order.

The team is billed for the frozen terrain of Milton Canada early next week.