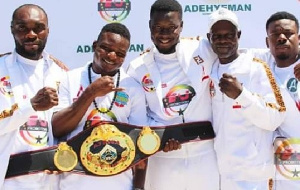 Wasiru, therefore, called on boxing enthusiasts to throng the Bukom Boxing Arena in time to prevent them from missing out on action should the fight end earlier than expected.

The Ghanaian fighter who is ranked 11th by the WBO will have the opportunity to make a strong statement for himself as he headlines the maiden edition of the boxing league this year in Accra.

It is expected to be a co-feature on the night when Jessie Manyo Plange slugs it out with John Chuwa of Tanzania for the vacant WBO Global super flyweight crown.

In an interview with the Graphic Sports ahead of his crunch fight with Amuzu, Wasiru promised to make a successful title defence in order to enhance his chances of landing a world championship fight.

“Everyone who wants to watch the fight must come to the venue early because I will finish the fight abruptly on the night. I don’t want them to miss any action from me. If you decide to come late, it will be to your own disadvantage because the fight will definitely end abruptly with me carrying the night,” he said.

The two big bouts are expected to headline a full package of juvenile, amateur and other professional bouts as the “Bukom Fist of Fury” makes its maiden appearance in the second season.

Having started last year, this year’s boxing league is targeted at reaching other regions in order to give fighters from the Ashanti, Western, Central and Northern regions the platform to develop their craft.

The Ghana Boxing Federation (GBF) and Ghana Boxing Authority (GBA) are bent on using the platform to unearth and nurture talents in the sport for the future as well as give professional boxers the chance to be competitive.