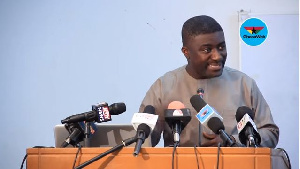 Ghanaians living abroad will vote in this year’s elections; the first time the franchise is being extended to them.

In an interview with DAILY GUIDE last Saturday, Dr. Eric Bossman Asare, a Deputy Chairperson of the Electoral Commission (EC) in charge of Administration, said this would be in consonance with a High Court ruling that the terms of the Representation of the People’s (Amendment) Law (ROPAL) be implemented.

The EC is only waiting for the nod of Parliament so the commission can go ahead with preparations for the polls to be conducted for Ghanaians.

“A CI will be sent to the Attorney-General’s Department which office will then send it to Parliament for its approval so the terms of the ruling can be implemented,” he said.

Per the court ruling, a CI has to be sent to Parliament by the end of the month which timeline, he said, the EC would meet.

Continuing, he said “EC will do what it has to do. If Parliament gives its approval then we would conduct the elections for Ghanaians abroad. We have been to the US and Senegal already as part of preparations for the implementation of ROPAL.”

Earlier last year, a committee was empanelled with Dr. Eric Bossman Asare as chairman to craft modalities for the rollout of ROPAL, the outcome of which was the identification of three key actions to facilitate the achievement of the objective.

These countries were identified as United States of America (USA), the United Kingdom, Mali and South Africa.

At the committee’s maiden meeting, it would be recalled that members agreed to request written submissions from the public towards successful implementation of the law.

Legal Backing The implementation of ROPAL is mandatory because it is a law. Observers have wondered why after its passage into law since 2006 it has remained a subject of foot-dragging, especially between 2008 and 2011.

A previous committee set up to make recommendations on the way forward for the EC submitted its report in September 2011.

With no sign of something being done about rolling out ROPAL, some concerned persons proceeded to court asking that the EC be compelled to implement the law.

For her to have a better picture of the situation and the way forward, the chairperson of the EC constituted a fresh committee as aforementioned.

The June-ending deadline was a problem for the committee considering the exhaustive terms of reference before it which included among others local consultations and foreign visits.

The High Court ruling included 20-month duration for the implementation failure to meet which the ruling ordered the EC to make a public announcement about a new date because of its inability to abide by the dateline.

A lot of water has passed under the bridge since the maiden meeting of the committee to date. Questions were raised by various stakeholders about the qualification of eligible voters, the status of voters living abroad, some of them being illegal immigrants and jurisdictional matters in case of electoral breaches.

A consensus was reached after exhaustive debates by the committee members that eligible voters must have valid Ghanaian passports and Ghana cards.

When ROPAL is eventually implemented, an enigma would have been cracked and the new leadership of the EC attracting the credit for the feat.

Whether the non-implementation was an act of omission or commission only Ghanaians can tell.

As for Ghanaians abroad, they would heave a sigh of relief having complained for so long over their non-inclusion on the electoral roll regardless of their mammoth annual remittances to the country.