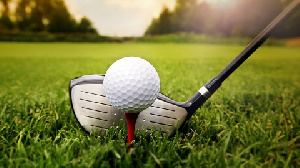 Antwi picked 101 points to beat over 60 participants, both professionals and amateurs who participated in the prestigious event.

The Obuasi-based golfer, in a host and win style, walked away with a giant trophy, cash prize of GH5000 and other giveaways from the organizers.

He was followed by Richard Boateng who finished second with 103 points. For his efforts, he walked away with GH2500 and a trophy while Daniel Odoom settled for the third position closely with a score of 103.5. He received GH1300 as his prize along with a trophy.

The defending champion, Amponsah placed fourth with 104 points to tie with Maxwell Owusu and James Akwaboah. The trio were presented with a cash prize of GHC700 each.

In the Seniors category, Rodney Oddoye won with a score of 78 while Philip Andoh followed with 81 points for the second position. They both received trophies.

Prizes were also given to winners of the nine monthly medals held last year ahead of Saturday’s competition.

Speaking after the event, the ultimate winner, Antwi expressed gratitude to organizers for providing the platform for both professionals and amateurs to compete for the same prize.

He said, it was challenging and exciting to have seniors engage juniors in golf as they were able to learn on the course and took inspiration from each other.

“I trained very well for this tournament with the help of my coach, Amponsah who is the previous winner and very glad to win this competition, “he stated.

President and Founder of Captain One Golf Society, Pius Ayeh Appiah congratulated the winner and other golfers who showed up to make the event a successful one.

“I am impressed with the turnout and the competition has been very exciting. We would only look forward to greater years to come as we urged corporate bodies and individuals to come on board to support not only golf but our efforts to give back to society through the Charity project,”he stressed.

The society he said, now has about 15 junior members through the ‘Deprived Kids Project,” and look forward to expand in a bid to take golf to orphanage care homes for kids to consider golf as a future profession.

The Chairman for the closing ceremony, Rodney Oddoye added that, the competition was laudable and well-executed with regards to the passion towards golf development and helping the needy.

The Chief Executive Officer for the gold sponsor of the event, R K Cliste, Ing. Raymond Baga said they were committed to the development of golf in the country and would continue to support Captain One Society.

“We are very passionate about the charity aspect of the game as it provides us the opportunity to give back to society, “he stated.